Difference between revisions of "2014/Organizing Team"

From WikiConference North America
< 2014
Jump to navigation Jump to search 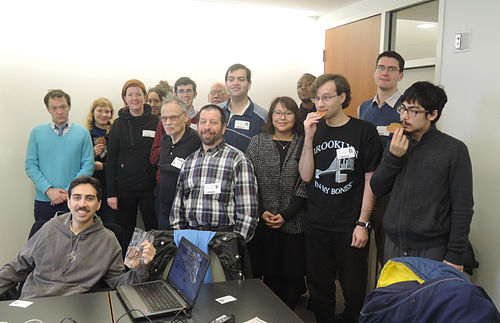 Richard Knipel: Wikimedia NYC President. A Wikipedian since 2004, in recent years with a focus on cultural and educational outreach initiatives such as Wikipedia Loves Libraries. He has organized WikiConference NYC and Wikipedia Day local conferences from 2009-2013.

Emily Temple-Wood is a current board member of Wikimedia DC and has been a Wikimedian since 2007. She presented at Wikimania 2013 on her work with women scientists and is a 2014 Individual Engagement Grantee for the Wikimedia Foundation. She is a molecular biology and Arabic student at Loyola University Chicago.
Email: keilanawiki@gmail.com
Twitter: [www.twitter.com/keilanawiki @keilanawiki]
Time Zone: Central Time

Dorothy Howard:Dorothy Howard is the current Wikipedian-in-Residence and Open Data Fellow at the Metropolitan New York Library Council, a member of Wikimedia NYC, and a GLAM programs officer for the Conference. Dorothy graduated from Reed College with a degree in History and has worked in archives and research at the Oregon Jewish Museum, Yale Union Contemporary Art Center, and the Reed College Library.

Adrianne Wadewitz:Adrianne has been a Wikipedian since 2004; she has helped develop the Wikipedia Education Program and worked on outreach through the WikiWomen’s Collaborative. She is dedicated to exploring how technology can revolutionize higher education. As a feminist, scholar, educator, and digital humanist, she is interested in empowering women by making the sum of all human knowledge available to them in their own language as well as making them producers of that knowledge. Adrianne has a PhD from Indiana University and works as a Mellon Postdoctoral Fellow in Digital Scholarship at Occidental College. She lives in Los Angeles, California, where she enjoys rock climbing and hiking.