From WikiConference North America
< 2016
Jump to navigation Jump to search

WikiConference North America will feature an edit-a-thon for each day of the conference.

The Wiki Culture Crawl is a pre-conference event dedicated to GLAM-Wikipedia activities at Balboa Park, an historic San Diego hub that is home to more than 15 museums and cultural institutions. It is designed to be the largest one-day collaboration ever between Wikipedia contributors and the GLAM (galleries, libraries, archives, museums) community.

The day-long event will challenge Wikipedia editors to improve articles identified by the organizations while also educating and training staff about the Wikimedia movement. Registered participants will be provided free admission to all the museums to assist in improving content, as well as special "Backstage Passes" – special tours and talks with experts at Balboa Park institutions and their unique collections.

Saturday’s edit-a-thon is in memory of Wikipedia editor Kevin Gorman, who passed away in July 2016. An advocate for gender equality, Kevin was dedicated to improving the coverage of feminist philosophy and women philosophers on Wikipedia. In 2013, he wrote: "Wikipedia has significant systemic bias; around 90% of our contributors are men. In a similar vein, philosophy as a field has significant systemic bias - women philosophers are less likely to be cited/written about/hold named professorships etc than their male compatriots are, even when they've made equally significant contributions to their field. Unfortunately, the bias of Wikipedia compounds the bias already found in philosophy. As a result, our coverage of women philosophers is horrible."

Over the next several years, Kevin wrote and improved dozens of articles related to women in philosophy. In addition, he put together a list of missing notable women philosophers. At the edit-a-thon, we'll work on creating and improving articles on underrepresented philosophers. The work list for the edit-a-thon is based on Kevin's original list, and, as he would have hoped, it's been expanded by others.

If you're not familiar with editing Wikipedia, there will be experienced editors to walk you through the basics. We'll be joined onsite by Cal Poly Pomona professor Alex Madva, who first introduced Kevin to feminist philosophy. Josh Milburn, a longtime Wikipedia editor and postdoctoral fellow at Queen's University in the Department of Philosophy will be available to assist remotely.

1:30 pm to 5 pm in the Helen Price Reading Room, 8th floor Join us for a training and editing session to improve coverage of notable chemists and chemistry topics on Wikipedia in honor of the Wikipedia Year of Science! As one of the web’s most visited reference sites, Wikipedia serves as a starting point for many non-scientists to learn about chemistry topics. During this training, attendees will learn the basics of how to edit Wikipedia entries and be given time to practice their skills with experienced Wikipedians. 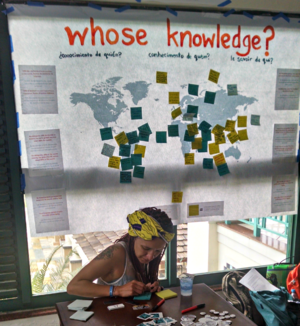 A woman mapping gaps in knowledge on the internet, AWID 2016

Join us for a training and editing session to improve coverage of notable Indigenous People throughout North America.

Siko Bouterse (Whose Knowledge?) will guide a discussion with keynote speakers Stanley Rodriguez and Michael Connolly Miskwish about gaps in Wikipedia articles, and we'll work together to address them.